Cosmo Jarvis is an 18 year old, 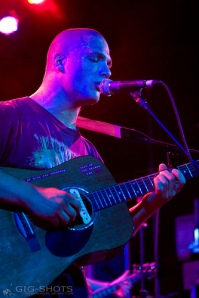 New Jersey born, part Armenian, Devon raised, singer songwriter, with a name that suggests he was a character on The Invaders. He claims to have written over 500 self penned songs and directed nearly 100 short films, his creativity often being fired by the irritating little things in 21st century life, or as he less verbosely puts it “the shit things that are shit” in dear little England nay the world in 2009. Lightweight, over-publicised celebrities are a particular pet hate of his, lately turning his Armenian ire on the likes of Britney Spears, Jessica Alba and Audrey Tautou (I’ve always quite liked her, but I didn’t want to upset him by disagreeing).

His new single “She’s Got You” is a wonderful mêlée of world music sounds, mixed with a feel good indie melody. It’s got strong Radio 1 airplay after being championed by the number one reason to dislike New Zealand, Zane Lowe, which to some people is the equivalent of being kissed squarely on the lips by a leper. But Cosmo doesn’t care, earlier in the month he supported Muse at their big homecoming brew ha ha, he has an album, partly home recorded on the verge of release and he spoke to 4ortherecord the morning after playing London’s very lovely Troubadour Club.

4TR: So how did you get into music, what led you into the position that you are in now?

Cosmo: Well I went to sixth form and that didn’t really pan out very well. But I always liked music and I wanted to pursue that. All the way through school I was writing and recording in my bedroom, but never with any idea that I would do it as a career. Ultimately though I just said “fuck it”, I’m going to make music, why not try building my life around something I want to do.

4TR: I read somewhere that you’ve written hundreds of songs, what prompts you to sit down and write?

4TR: You write songs that have a go at celebrity culture to, I’ve read you’ve written songs about Jessica Alba (star of 2008’s Mike Myers vehicle “The Love Guru) and Britney Spears (balding baby dropper and poster-girl for the Republican Party), not complimentary ones thank goodness.

Cosmo: (Groan) Oh that song is so old, everyone keeps bringing that one up!

4TR: Is celebrity culture something you want to highlight as amiss though?

Cosmo: I don’t know if it is anymore, maybe it used to be, I just kind of realised it’s all bollocks. It was just when I was younger, I mean these women……man, it’s mental. Now I just tend to write about shit things that are shit.

4TR: So you’re casting yourself as a bit of an angry young man?

Cosmo: Yeah, I suppose, sometimes people probably think I’m just a bit of a prick though…..a bit of an arsehole! I do like to challenge things sometimes though.

4TR: What would you say your influences are musically? There are lots of different sounds on your single “She’s Got You”, African beats, mixed with reggae and ska.

Cosmo: I like a lot of different world music and music from different cultures and I’ve taken a lot from that. But then again, some songs will have non of that, they’ll just be really indie, really electric, really orchestral. That particular song I just got into the jive of it. I guess it was most influenced by that song……..what the fuck is it called……it’s in Matilda…..

4TR: How has touring been for you, your totally new to that, how have you found it?

Cosmo: For me it’s not my main thing touring, touring is a side effect of me making recordings in my bedroom. It’s alright, you get to meet some amazing people and a gig is good when it’s done well and it works well. Sometimes I play solo acoustic and sometimes I play with a five piece band.

4TR: So do you always record in your bedroom, do you ever go into the studio, or do you just like recording yourself?

Cosmo: Yeah, totally that’s the only reason I do any of it. A couple of tracks on the album were done in the studio, which is easy because my uncle owns one, which I can use. In the past I’ve made a couple of tracks with him and a couple with a producer, but that didn’t really work, I’m pretty much a fascist when it comes to music! I don’t like other people interfering. Even if their fucking right, I tell them to fuck off, even when I know I’m wrong. (Laughs) That’s the only part of life I’m like that in though!

4TR: Do you see yourself as someone who is always going to record away from the studio?

4TR: How was Muse? You supported Muse at their recent homecoming concert in Devon. What was that like as an experience?

Cosmo: It was one of the weirdest things I’ve ever done. I live around there and my old music teacher used to teach them. She told me all this crazy shit, like they stole a double bass from school. I didn’t see them but it was mental.

4TR: Your new album comes out on the 2nd November. Can you describe it for me in a few words.

Cosmo: It’s an accumulation of songs from the last three years basically. Each song has a totally different production; no two of them are really the same. Some of it is cheesy shit, but I like cheesy shit! Some of it is a bit reggeish, others folky. It’s got everything, with instrumentals and hidden tracks all thrown in for good measure.

4TR: Is there any particular route you want to pick in the future, you’ve mentioned many different sounds.

Cosmo: I want to start doing soundtracks to movies at some point and start to use a whole host of different instruments. Many times a song is limited to the instruments I’ve got at home, so I would certainly like to develop my sound. Which direction I’m going to focus on I’m going to leave to time to decide.

4TR: Last question, who is your musical hero and what if push comes to shove is your favourite album?

Cosmo: I would say Tom Waits, he’s got a generally “self made” element to his music, which I like. He makes some of his own instruments and he writes songs with his wife (Kathleen Brennan). I could never do that! (Muffled voices in the background) Oh yeah, I don’t have a wife. As for album, I would probably say Rain Dogs by Tom Waits. The last track on that “Anywhere I Lay My Head”, is probably my favourite song of all time.

4TR : Well that’s about it on the question front Cosmo, good look with the album, the rest of the tour and thanks awfully for talking to us.