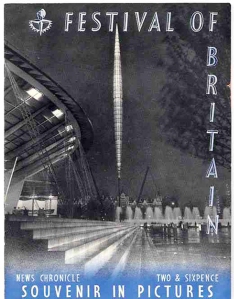 Harlow. 1961. Pram town. Rent a house from the corporation and live your life built to specifications dreamt up by middle aged white men, hunched over drawing boards smoking Capstan cigarettes, a million miles away from the marital bed which will define your existence. Unemployment is virtually absent. The economy booms, powered by manufacturing, while a string quartet plays Brahms in a converted launderette and young pretty girls are tempted away from the technical college to the glamorous jobs available in The High at Harlow, where in salons with their curlers and dryers, they go to work on countless dried up look a-likes of Diana Dors. Variety and liveliness fostered in a town sized petri dish.

Harlow. A planned town. A brief “perfect” vision of a future Britain which could have been but never was. A future Britain in the heads of wonks and experts which burned into life and fizzled out almost the moment the match was struck. The match, just in case you’re wondering, was lit at the Festival of Britain in 1951, a great pageant of modern and retro thrills, a secular, republican, modernist mêlée and an inspiration to the creators of England’s new towns of the 50′s and 60′s.

The Festival, which celebrates its 60thanniversary this year, was held on the South Bank of the Thames at the behest 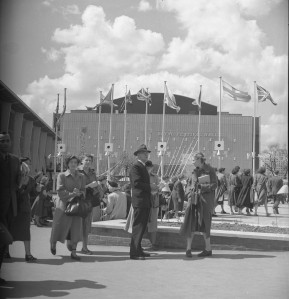 of the then troubled Labour government, as a “tonic” for a war battered nation, “a national festival, which would display the British contribution to civilization, past, present and future, in the arts, science and design.” A 12 million pound pick-me-up in the sodden aftermath of war. A lavish government arts project in a time of real honest to goodness austerity.

Sir Terence Conran, the founder of Habitat, as a young 19 year old designer worked on the Festival aesthetic and remembers the skill and materials lavished on the Royal Festival Hall, the one surviving legacy of the project. “Just imagine all around you were bombsites and here was a building using wonderful materials, wonderful woods, Derbyshire fossil, one of the most beautiful materials that I know for walls and floors.” Sir Terence worked on some of the non-permanent elements of the Festival too, which were a lot more difficult to put together. Designing furniture for the Homes and Garden Pavilion, echoes of which can be found in his first collections for Habitat, he found materials much harder to find, “The furniture was mostly made out of welded reinforcing rod,” he says, “which was about the only metal material you could get, you used to have to have a word with someone on a building site to buy some reinforcing rod, as there was such an extraordinary shortage of materials in Britain at that time.”

The modernity did have its limitations though, this futuristic tonic had to be made palatable for conservative middle England. So there were strings of bunting, loving recreations of the joviality of the British seaside and “lots of pointless models which merely pleased,” as Hugh Casson, the chief designer of the festival labelled them. It was, says Dr Paul Rennie, Head of Context in Graphic Design at Central St Martins, London, “modernity with a tea urn,” a grand vision of a high tech future made in England, twinned with the imagined rise of a modern socially responsible society, born out of the social togetherness years at war had fostered. A complex message concealed within the atmosphere of a village fete. 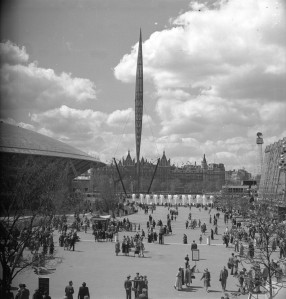 And yet the stars were not aligned in this national menagerie’s favour, as Dr Rennie points out, “The Festival was an exemplar of what would happen if Britain continued making the sort of products it made during the war, but directed towards benign civilian outcomes, what nobody expected was that the entire industrial base which supported the Festival would be gone within fifty years.” The Festival also failed to predict that the camaraderie and fellowship which had enveloped all levels of British society after six years of fighting together in a common cause, would quickly melt away and that the pageantry of the Coronation in 1953, broadcast for the first time to houses up and down the nation, would set the countries heart once again a flutter for monarchy and revive our affiliation to a top down capitalist society.

Back to Harlow though, our brave new town, our grey Jerusalem built in the Festival’s image, rising from dear little England’s green and pleasant land. The rapid decline in the resonance of the Festival’s style and message can be seen in the way Harlow developed into a suburban owner occupier town. Buried in the Greater London commuter belt, it’s social space, it’s lovingly crafted band stands and paddling pools, park side mosaics and murals all abandoned, left as monuments to a way of life which simply melted away.

We got a little rebellious you see, a little uppity, we got as time went on, a taste for prosperity and the insular, protective nature prosperity can sometimes foster. In other words, newly affordable fun and luxury began to trump neighbourliness and playing the Good Samaritan.

Deference died too, deference inspired by fear, fear of the war-time generation, who were afforded a kind of pious 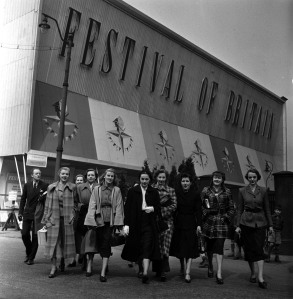 allure until the dawn of the 1960’s. Neighbourhood hero’s like the Colonel in the end terrace, who had seen action in El Alamein and knew General Montgomery personally don’t you know, enforced a sort of short back and sides, Harold Macmillan inspired sense of dullness and decorum. This authority figure, epitomised by Jack Warner’s PC George Dixon, the sainted neighbourhood policeman, started to disappear as the 50’s progressed, he died, he retired, just as ironically, a few months before the festival opened, PC Dixon was shot to death, by a trench coated spiv, white scarf buried deep in his face, in a film called The Blue Lamp. A fictional symbol, with hindsight, of the changing times to come.

The basic ideals of the Festival, neighbourliness and community participation, have made a half hearted return to the fore, making as they do the basis for David Cameron’s Big Society. Cameron has failed to articulate the meaning of his project and he has failed to recognise that his Big Society will flounder for exactly the same reason the Festival’s vision faltered, simply because people have too many problems, too many personal and commercial distractions to ever have the inclination to give themselves fully or even partly to the benefit of society.

However, in a way, Cameron’s project and his failure to flesh out its purpose, has accidentally hit upon the perfect definition of what 21st century Britain has become and ironically, it is another thing the Festival never predicted. The country has become ambiguous, its message blunted and its meaning muddled by the effects of immigration, popular culture, industrial decline and global irrelevance. As the design critic Stephen Bayley told me, “The Festival was the very last occasion when the nation could still articulate some kind of common purpose.” 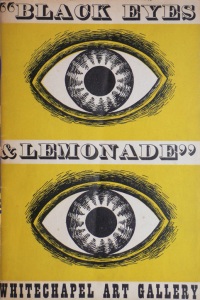 And yet it is perhaps better to say that our shared creed, our common purpose today, is our diversity and our ability for unfettered self-expression. Our society is far too gorgeously complex to sum up under the roof of a dome or to pigeon-hole in a single message championed by a London centric jamboree. Yes, our meaning is ambiguous and although this does not lead to cocky self-confidence in a national myth like in the days of yore, it does lead to a quiet sense of assurance, among most, that our whole is greater than the sum of its many parts.

One of the various sidepieces to the great Festival was a show put on at the Whitechapel Gallery by Barbara Jones, which exhibited what she labelled as the “unsophisticated arts”, a whole host of toys, souvenirs, trinkets, gewgaws and bibelots from throughout British history. What does one call such a grand treasury of myth and fancy? Well Barbara called it “Black Eyes and Lemonade” after the line written by the Irish poet Thomas Moore, “A Persian’s heaven is easily made, tis but black eyes and lemonade.” Ambiguity, see? The best way to label the knottily indefinable.