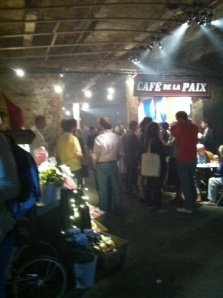 I’m not the kind of guy who generally appreciates secrets or surprises. I’m the kind of guy who likes to know just what the hell is going on. I appreciate planned surprises and I appreciate secrets when I’m in on the gossip. If someone organises a surprise party for me and gives me a guest list specifying date and time, then I’m down with that, pull a real surprise party and I’ll most likely panic and hide under the sofa until everyone has gone home. I like to plan ahead, have a stash of anecdotes at the ready and have the prepared air about me of the refined bon viveur. Ha! As I said, I like to know just what the hell is going on.

But every now and then I’m willing to make an exception. Well, frankly I’m always making exceptions, I’m a lover of predictability who is living an erroneously unpredictable life, thus I always have a headache and a creeping like for the music of Vanilla Ice (I don’t really, that was an unpredictable comment, designed to catch you off guard, oh how I love the art of being unpredictably unpredictable.) Anyway, the point I’m trying to make is that while queuing up to enter the latest Secret Cinema presentation, the bi-monthly showing of a secret film, shown in a site-specific location, held this month in the cavernous arches under Waterloo Station, the scene bringing to mind a cold war-espionage flick, my unpredictable nature made me predictably nervous.

We had been ordered to assemble at the location dressed in 1950’s style clothes, smart, elegant suits and sunglasses, graphic patterned dresses, washed out colours, scarfs and foulards. I opted against the patterned dress and foulard and instead when for the smart, elegant suit. I looked good. Many people looked good. Very good. Others looked like they had assembled their outfit at the Elephant and Castle Oxfam and others hadn’t bothered at all. No, they didn’t have cuffed hem carrot jeans in the 1950’s, they weren’t that silly.

The dark arches had been transformed into what appeared to be a North African souq, patrolled by French

soldiers and women in white robes, complete with market stalls and smoky bars, which brought to mind Bogart and Bergman and a kiss is still a kiss. Could the film be Casablanca? I wondered to myself. No, the obvious lack of Nazis ruled that one out, that would be like the Sound of Music without nuns. Or is that Nazis? Actually I think the Sound of Music has nuns and Nazis. The motherload. Anyway. I digress. The attention to detail was really quite impressive. A band played La Marseillaise, while armed soldiers patrolled gantries above us. There were people sleeping and living in houses, which made up streets and squares. “As-Salamu Alaykum,” one of them yelled out to me, “hiya,” I called back, sheepishly, in my northern accent.

There was a milk bar too; we had been given a milk token at the gate, which could be cashed in for a plastic cup of milk. It’s what I imagine school before Mrs Thatcher to be like, only this milk had a shot of something lovely in the bottom, which made the whole thing much more worthwhile. They were playing Jacques Dutronc. I love Jacques Dutronc. We danced. And then it dawned on me. Milk Bar! Bomb! French soldiers! The windy, claustrophobic streets of the North African market! The film was the Battle of Algiers, the French New Wave classic from 1966.

Things began to make much more sense from that moment on. The excellent acted pieces of drama that were going on in the tunnels were creative recreations of scenes from the film. There was a torture chamber at one end, with one poor soul, an Algerian fighter, behind a mesh fence, being berated and bruised, beaten and drenched in cold water by a French interrogator. It was really quite a compelling scene, contrasted with the frivolous atmosphere of a nearby bar room. One woman, drink in hand, sidled up to the fence and declared “Oh, I do love a bit of torture!” I had a feeling that one was coming. Little smatterings of theatre were being played out elsewhere too. Every now and then a cocky fellow would crack a joke to one of the French troops and get dragged off kicking and screaming and some kids would pester a tramp, at one point pushing him down some stairs. Bit much to stomach really, when you’re tucking into your second ham and cheese crepe of the evening, from the crepe stall, but I’m English, so my upper lip was stiff. 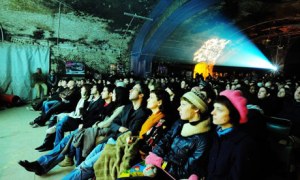 We were herded into a side area to watch a rather engrossing theatrical scene, depicting four young girls being prepared to plant bombs, the terrorist outrage portrayed in the film, while four drummers beat a military reveille, as the scene played itself out. There was then a brief lull in proceedings while the bombers fanned out into the crowd. Milling around, I saw one of the terrorists and shouted something that would have got me shot, had I said it in an airport or in front of Buckingham Palace. “Careful” I yelled, “she’s got a bomb!” And she gave me a look which could have killed a panda bear.  But it serves me right for not staying in character. And indeed, for being so predictable.

The theatrical part of the evening was brought to a close by the bombs exploding in the central square. It was done effectively, with smoke billowing and soldiers screaming, creating a real sense of confusion. Amid the commotion we were evacuated into where we would watch the film. My only complaint about the entire Secret Cinema set-up was that there was not enough room for everyone to fit into the make-shift cinema, with its antique picture-house seats and its cranky old projector. I just missed the cut and had to sit on a cushion, on the floor, in the overflow room, which was dressed up as a mosque. Not particularly comfortable for two hours, but having said that it was one of the most bizarre places I’ve ever watched a

film, in a dirty tunnel, deep underneath Waterloo Station, surrounded by people in 1950’s dress, shoes left at the door to “observe religious practice”, or basically to prevent the “mosque” carpet from getting muddy.

I did, I must confess, sometimes get distracted away from the thrilling, if sometimes cold action of the film, distracted by my surroundings. Particularly by the guy sat directly in front of me whose shoulder I could see over, for whom it took nine attempts to spell the word “mosque” in a text message to his mother. In the end he had to ask his friend, who spelt it wrong too. Nothing distracts me more than bad spelling and birds of paradise, as Phil Silvers used to say. Nevertheless, I enjoyed Secret Cinema, it turned going to see a film into an experience again, a communal experience. If cinema is to survive as a communal activity and not be replaced solely by sofas and DVD players, then it will have to adapt and diversify its offering. Most of all, I enjoyed the unpredictability of it all, and for a self-confessed lover of the predictable, that is really something.