Sitting in England, staring at an atlas, if people still have those, Buenos Aires looks like it’s sitting at the end of the earth, but get there and you feel at home very quickly. Wandering around the cobbled streets of San Telmo, soaking up every cliche coming true, in a good way, you swagger around like a local, forgetting the fact you’re lost, as a man in a muted post horn tee shirt sells you prog tango records, while a woman in a kaftan, next door, stuffs blood sausages and slaps veal cutlets into breadcrumbs. All this in a market hall where Eva Peron playing cards sit next to mangoes, in season, or out and bottles of wine and wooden cups crafted every which way to sip Yerba mate tea out of. If you’re willing to brave the never ending plane flight to get there, then Buenos Aires presents itself to you on a plate. You don’t have to scratch too far beneath the surface to get a gob full of Argentinian culture, be it viewing the bear pit down at La Boca where Maradona used to spirit dance his way around La Bombonera, or admiring the tango dancers down on Caminito, while the River Plate sits, like a millpond, at the end of the street.

Up in Palermo, amid the wide Park Avenue style boulevards, where stylish bars mingle with craft bakeries and coffee houses on streets named after near neighbours like Costa Rica and Uruguay, you will find the excellent MALBA museum. Devoted exclusively to twentieth century Latin American art, the museum is something of a revelation, not least because of the riot of colour you will find upon its walls, Latin American art it seems rarely does drab and when it does the passion bowls you over and kicks you in the knackers anyhow.

Created by Argentine moneybags Eduardo Constantini and designed by AFT architects, the sleek halls take visitors on an artistic journey from the modernism of the early twentieth century when South American artists took their cues from European Expressionism, Cubism and Futurism to the surrealist twenties when artists began to look to South America’s own ancient stories of magic and fantasy for inspiration. The exhibition culminates with the turbulent 1960s when art became a weapon against a brutal dictatorship. Here are some highlights from the collection.

Oscar Bony was one of the most influential of all Argentinian artists, becoming a key figure in the Instituto Di Tella scene, an art school in Buenos Aries, which was an artistic hotbed. Bony emerged and flourished in Buenos Aires in the early 1960s in the brief period of unfettered artistic freedom between the fall of Juan Peron and the arrival of the military dictatorship of Juan Carlos Onganía in 1966. The rise of Ongania would prompt an intensifying of artistic power in Argentina starting when Eduardo Ruano famously smashed a photograph of John F Kennedy as a protest against American action in Vietnam, but this would ultimately give way to censorship, with the police shutting down anything that carried even a hint of an anti establishment message. This prompted Bony to flee to Milan, where he became a music photographer for a while. El triunfo de la muerte (The Triumph of Death) features a number of images of a man being shot in different theatrical poses, the bullet holes are actually visible in the glass to add to the dramatic effect. The piece offers no real continuity, it is not a comic strip despite appearances, instead it offers the message that there is no escape from death, this is not a picture of a process, rather it is a visualising of finality. There is though a political element, the bullet holes match those fired by a Walther PPK handgun, the same weapon that was used to kill Rodolpho Walsh, an Argentine investigative reporter who was murdered in Buenos Aires in 1977 as he was about to file his famous ‘Open Letter from a Writer to the Military Junta’ which exposed the damage the regime’s economic policies were having on the Argentine people. This work offers an image of a man reaching the peak of his expression right at the very moment of his death. 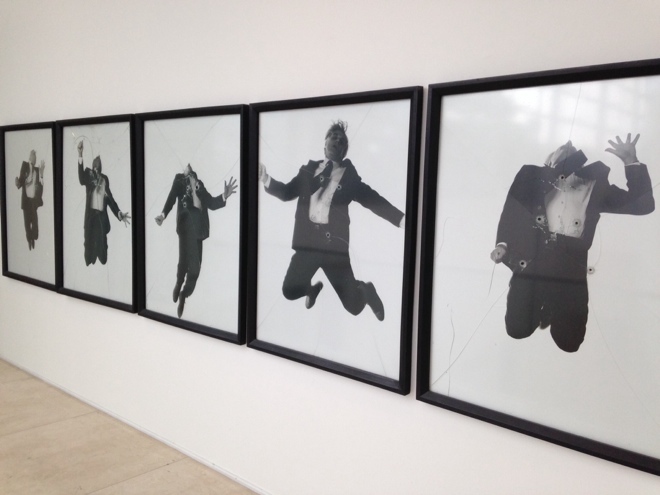 An example of how South American artists, despite their own rich tapestry of culture, were sometimes inspired by European history. Maria Freire, an artist from Uruguay, was often inspired, when creating her Sudamerica series, by Medieval imagery, which is surprising given the utterly modern feel of her work. Created in 1958, the Sudamerica series features a relatively reserved colour palette, something that she would go on to expand in her later work. Rhythmic patterns and chains of symbols are featured throughout her portfolio.

This piece prompted something of a controversy when it was first shown in 1968, a time when Argentina was in the grip of military dictatorship. The work was originally live action, with Bony ‘hiring’ a mother, father and son to sit on a platform at the Instituto Di Tella, while sounds from their everyday life played behind them, creating a kind of staged voyeurism. MALBA honours the work’s original power by displaying a six foot still of the instillation. La familia obrera was of course a mould breaker, blurring the lines between performance, art and sculpture, but it was more than that, it was a particularly bright spark, in a year full of bright sparks, 1968, which further spread the flames of political tumult already raging around the globe. It was also a piece about the exploitation of the working classes of Argentina. They were Evita’s power base, she called them the descamisados, the shirtless ones, pouring money into charity programmes to help, while docking their pay checks to fund them. The people presented in this picture are representations of the working classes of Buenos Aires at the time, the working classes of wider Argentina must surely have not looked nearly as well healed, but perceptions are everything. The original work proved so controversial that it was shut down by police. 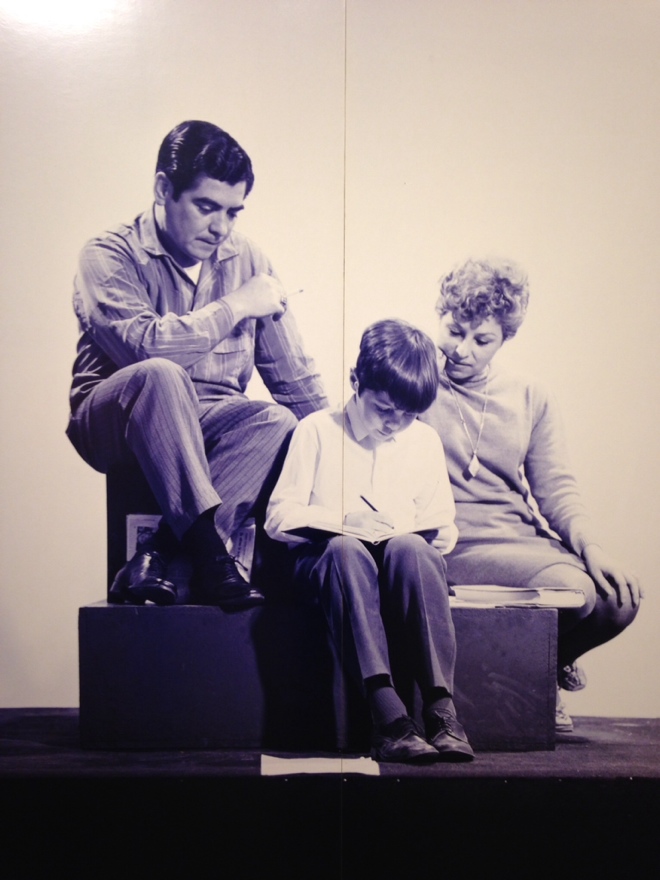 Costigliolo was one of the most important artists in Uruguayan Modernism. He dipped his toe into Cubism, Purism and Russian Suprematism, producing both figurative and non-figurative works. In 1952 he co-founded the “Non-Figurative Art Group” in Uruguay with his artist wife Maria Freire. He is considered to be a pioneer in his home country and his work is never dull, but always a sharp explosion of pop colour.

Wrinkle is all about perceptions, it presents pictures of crumpled up pieces of paper next to some typed dialogue, which suggests that the viewer reconsider the beauty of wrinkled paper. Born in Argentina in 1941, Lilliana Porter’s work has a sense of aesthetic austerity running throughout it, sometimes she uses little to say a lot and sometimes she uses little to say nothing at all. The printed conversation between ’emm’ and ‘ett’ kicks off with:

“emm: so are they wrinkled pictures or pictures of wrinkles?

ett: well to begin with, they’re not pictures.

emm: and what would you call them?

ett: you may not need them, but you’ve got them.

Before going onto describe all the majestic things that are wrinkled, ripples of water, your pants, the surface of the moon, oh and this article, when you rip it up and go, ‘that’s enough of all that!’ But, it will still be beautiful and there’s nothing you can do about that, sorry!