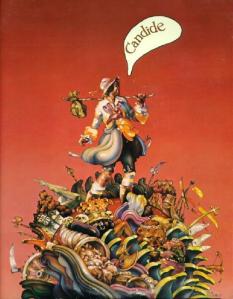 “Once upon a time in Westphalia, in the castle of Baron Thunder-ten-tronckh, there lived a young boy whom nature had endowed with the gentlest of dispositions.” The young boy was of course Candide and his tutor in Voltaire’s Westphalia, the irrepressible Dr Pangloss, who teaches him that “there is no effect without a cause, in this best of all possible worlds.” The best of all possible worlds? A laughable myth says Voltaire in his skinny little novella from 1759, a non-existent fool’s paradise, which even if it did exist somewhere in the universe, is certainly not the hallowed terra firma on which humanity exists.

Before Voltaire swaggered along and dropped a brick in the jelly, people really

believed that we did inhabit “the best of all possible worlds,” despite fairly obvious evidence to the contrary, like famine and death and blood fueled inquisitions, plenty of good old wars and to use a ten year old’s reasoning “all the bad things that happen in the world.” People like Alexander Pope believed it, renowned poet and sage, who famously wrote in his Essay on Man “all that is, is right.” A phrase that was echoed by the intimidatingly Germanic sounding Gottfried Wilhelm von Leibniz, who helped found the charmingly named philosophical school of thought “Optimism,” suggesting that if God is the perfect creator, then even the most terrible things that happen in the world, happen for a wonderful reason, just a bit of a downer, a slightly sad caveat, to an absolutely fan-flipping-tastic grand plan.

Then in 1755 an earthquake so unimaginable in scale hit Lisbon, Portugal, 100,000 died and the vastness of the damage and the amount of human suffering caused, prompted Voltaire to write “Candide” and put a blunt instrument to the beautiful charade that was “Optimism.” Whatever “is” certainly is not right he said, nor is it wrong, what “is” is simply all that there is and it is up to us to do with and build upon what we have, in other words “life is neither good nor bad, life is life and all we know,” as the chorus sing in Leonard Bernstein’s operetta, based on the book.

What, you may wonder, has this clunky lecture got to do with Charles Avery, a Scottish artist, who is about to open his

first Parisian show at Le Plateau. The answer is not that much, but enough to matter. His continuing epic work “The Islanders” describes a fictional world, defining its landscape and inhabitants through sculpture, drawings, texts and installations. His fictional Onomatopoeia (the name of the islands main town), like Voltaire’s Westphalia, or Swifts Lilliput, offers a base for Avery to express his ideas,  a place to gather his thoughts together, which acts as a little Petri dish for his art. “My primary motive was to create a space where I could put all my ideas, to try and understand them in relationship with one another.” Although “The Islanders” is not a narrative work, with no unwinding plot to speak off, it is a collection that draws an awful lot from age old philosophy, reflected in the place names he has given to locations on the island, such as the Causeway of Effect, Cape Conchious-Ness and the Analitic Ocean.

“The Islanders,” much to the artist’s ire though, is often compared to the work of J.R.R. Tolkien or Mervyn Peake. “I can’t stand Hobbits.” Charles says, “Even when I was a child I had an antipathy for Tolkien, I have a little more sympathy for Peake, but they are certainly no influence.” Charles believes that the comparisons spring from people’s fixation with the odder creatures that are resident in his fictional world. Creatures such as “Mr Impossible”, “a sort of greasy platypus” and the deity, “Aleph Null” whom the artist describes as a “creature no weirder than any of the gods that humanity has dreamt up.” A giant white sculpture of the creatures head sits in the exhibition, its long nose culminating in a small effigy of itself,  a bit like a freakish version of Pinocchio had his lies been particularly nasty and if Geppetto had wielded his chisel after a couple of whiskey sours.

His drawings offer a fascinating, if fleeting glimpse into this world. Many of the pictures have an almost unfinished

quality to them, like they were based upon passing images, momentary windows into the depths of his imagination, which he had to capture, before they were eaten up by grim forgetfulness. However hastily drawn though, these often colourless pictures, offer a great amount of almost Hogarthian detail, briefly illuminating the under-belly of his society. One depicts a market, with a bevy of rather grim looking fellows, lurching over antique and bric a brac stalls, selling old lamps and toy tin aeroplanes, a hipster in a trilby briefly considers a cigar case, while the outlines of pyramids grace the skyline behind him. “I think of the drawings photographically” he says “except I cannot take a camera to the island. There is a lot going on in the drawings that is not directly meaningful, but which amounts to texture, people caught in the moment.”

Charles though is not attempting to create something chocked full of Panglossian positivism, just as Voltaire dismissed “the best of all possible worlds” with a satirical flick of his pen, so Charles dismisses the principle religion of our day, science and its claim to offer the absolute truth, its claim to solve the mysteries behind our own existence. “Science as far as I’m concerned is like any other religion, we just happen to be living in its heyday. I’m not saying science does not work, in terms of local truth, its fine, but its claim to absolute truth is as laughable as any religions.” Our own knowledge of the mysteries behind our existence is as patchy as our knowledge of Charles’s world, you can sow something around the physical evidence, the taxidermy statues, the drawings and texts, the sculpture, but the rest of the picture is filled in by our own imagination, with colourful, flamboyant, guesswork.

Of course with a world to prune and tend, with works to add and to toy with creatively, one could imagine this becoming 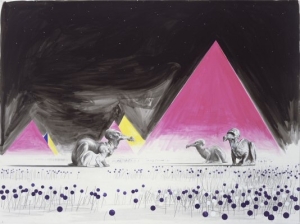 an all consuming, life-long project for Avery, something that he can never quite let go of or set down. He makes the point though, rather intuitively, that while there is no limit to imagination, there is a limit to life and he is currently in a phase where he is putting things in perspective. He admits that “The Islanders” take up a lot of his time and his creations now have much more pressing rivals for his attention, in his three young daughters. He sums up his current outlook by quoting a line from the James Stewart film, Harvey, “In life you either need to be very clever or very nice. I spent the first 40 years being clever, now I am being nice.” Optimism in its purest form you could say. But whether or not “The Islanders” benevolent creator is always there to oversee them, the relics of their civilization will always exist on paper or in sculpture, like the antics of the Lilliputians preserved in the pages of Swift. A creation far from the best of all possible worlds I suppose, but then again who would want that?