In 1931 Gandhi visited Manchester, well he actually visited Darwen, which is in Lancashire, but it is close enough to illustrate the point I’m labouring to make. It is perhaps much better to say he visited the North of England, a place with a particular feel for life, with a populace that harbours a prickly wit, twinned with a whimsical sense of pessimism and a well instilled favour for kindness. Yet in 1931 the North was suffering the harsh effects of the Great Depression, made doubly worse by Gandhi’s own self inspired boycott of British goods to force the Government to grant India her independence.

Nevertheless the reception he received from unemployed mill workers and ordinary working class Northerners was nothing short of magnanimously lovely, with thousands of people deciding to opt for an afternoon of Gandhi spotting. It just sounds like such a wonderful Manchester welcome, despite the animosity some must have held towards him. I can imagine one old lady in the crowd whispering to another old lady, “Uppity little bugger isn’t he?” and the Lord Mayor bawling into the ear of a bureaucrat, “It’s bloody Gandhi better put a spread on and get some pale ale in.” It’s the humour that marks Manchester out as special. It’s the feeling that Manchester loves you dearly, but it won’t put you on a pedestal. No matter how important you may be, it will treat you as an equal. Manchester will fall in love you, by making fun of you. It’s our cities way.

This was one of the stories that inspired the Turner Prize winning artist Jeremy Deller, after he was given carte blanche by the organisers of the

Manchester International Festival, to put together an art-work for public consumption. In keeping with an artist who claims to have no traditional artistic skills, Jeremy opted to create a parade saluting Manchester and its indomitable spirit. “A procession is such an efficient way of doing something,” Jeremy says, “everyone understands what they are, it’s a very approachable art form and a great way of getting a lot of good ideas into one thing, contradictory ideas, following one another.”

“Procession”, as the work was officially titled saw all the best bits of Manchester’s family china dusted off and marched down Deansgate, the whole patchwork quilt of achievement, tragedy, diversity and musicality. I suppose there is some element of risk involved in getting a born and bred Londoner to sum up a city as proud of its own identity as Manchester, but Jeremy was undeterred, gamely trouping into Cathedral Gardens, in his seemingly trademark Birkenstocks to recruit Goths, moshers and skaters to join his cause. Thankfully he got out with his life, complete with a few willing participants to march with him. The parade also included a fleet of local mobile libraries, a group of dedicated “The World of Twist” fans, a line of horse drawn hearses containing bouquets dedicated to lost Manchester landmarks, a float of Stretford Rose Queens, a very wheezy and pale looking group of un-repentant smokers and a whole host of football mascots and marching bands from across the metropolis.

He was also inspired by Oldham, and Steel Harmony, a steel band he spent months working with there, a great example of Oldham’s sublime multi-cultural brew, concealed behind the red brick mills and dilapidated old terraces. “If Oldham created Steel Harmony, then I love Oldham,” Deller says with a slight glimmer of a grimace, before noting that the town’s grim Spindles shopping centre dominates the area like a “fortress on a hill.” An early 1980’s Castle Grey Skull ready to emit a new He-Man on the word, comprised of Asda plastic bags and rotting Gregg’s pasties. Oldham though is perfect fuel for Deller, an artist who thrives on examining the idiosyncratic habits, divisions and traditions of community, usually communities challenged by the march of decline and de-industrialization. He is inspired by real stories, real people and the way human beings interact and live beside one another, most crucially he is inspired by a simple fascination with the world around him. His work, although beloved in some quarters, has prompted outrage in others. His tendency to organise, film or curate projects, rather than use “traditional” skills has seen his work used as ammunition by those who see contemporary art as empty. He has also been accused of laying a cold sneering London eye on the habits and the traditions of Britain’s working class, turning them into fodder for the cultural elite.

Most famously in 2001, Jeremy recreated the Battle of Orgreave, the pitched battle that saw police and striking coal miners dramatically face off in 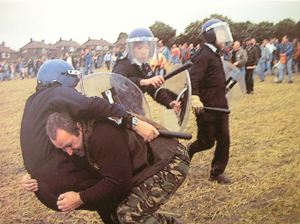 1984. For the giant piece of performance art which Jeremy labelled “The English Civil War Part Two”, the artist recruited veterans of the original battle to reprise their roles. “It was a kind of autopsy,” Jeremy says, “an exhumation of the battle to see what state the body was in, it was not an attempt to heal a community, only to observe.”

Jeremy describes “Memory Bucket”, the film for which he won the Turner Prize in 2004, as a piece about “places in Texas where things have happened, sites of conflict and controversy.” Places such as Crawford,Texas, home of former President George W Bush and Waco, the scene of the infamous Branch Davidian siege. “These were just major elements of the Texan landscape that I picked up to use, materials to craft something around.” A fact that most people are unaware of is that the Crawford Bush ranch is a mere 20 miles away from Waco, a stone’s throw in Texan terms. Two very different slices of American history, which seem to reflect each other’s tragedy, tossing misery back and forth and two images that became the centre points to Jeremy’s film. 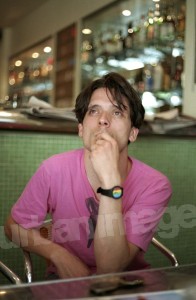 “Memory Bucket” was created in 2003 at the height of President Bush’s popularity and Crawford , Jeremy remembers, was a Mecca for the Bush powered patriotic hoopla, which gripped the country at the time. The town sported Bush gift shops stacked full of Bush memorabilia, as tourists milled around from across the globe, a feverish mêlée akin to a gold rush, only with the rivers running red white and blue instead of sparkling with scratch. Yet just 20 miles down the road sat the contentious ruins of Waco and all the swirling conspiracy and controversy which hang over those remains like a fetor over a rotting corpse. “I saw the Waco site as a counterpoint to the Iraq war,” says Jeremy, “yet another example of the American government’s tendency to rush to judgement and then rush to violence.”

The conclusion of the film captures a startling natural phenomenon, millions of bats streaking across the Texan sky at dusk. It is an image, Jeremy says, which “cleanses” the film of all the violence, trauma and division which has preceded it. The bats (creatures which are something of a Deller obsession) leave in their millions nightly and fly a mile or so up into the atmosphere to feed upon moths that are being carried around on thermal clouds and flowing metrological currents. It’s a romantic thought that nature goes on no matter what man’s sins, not always true of course, but a nice thought nonetheless

So what next for Jeremy Deller? Of course he is not exactly sure, any plan would restrict his sense of creativity and 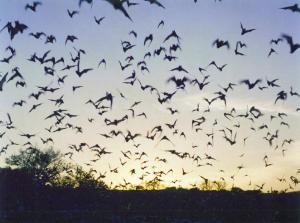 his desire to seemingly do the exact opposite of what the art world expects of him. Neil Young is a name which keeps re-occurring when talking with him, he is a huge fan of the Canadian troubadour, not only for his willingness to adopt a cause and stick with it, but also for his seemingly constant need to self-sabotage his career, releasing albums such as Trans, a record of synth pop, music so far removed from what he is renowned for and an album which, Jeremy notes, almost got Young sued by his record company for “not sounding enough like Neil Young.” It is likely that whatever the London artist does next it will look, feel and sound as little like “Jeremy Deller” as possible. In fact if one was to take his work as a whole, as it stands today, it would be very difficult to come to a firm conclusion as to what “Jeremy Deller” actually is, such is the variety of the topics he has tackled and the transient nature of his portfolio. It is though fair to say that his work, however tinted with the odd hallmark of absurdity, does succeed in, as Percy Bysshe Shelley said, “teaching the human heart, the knowledge of itself.”