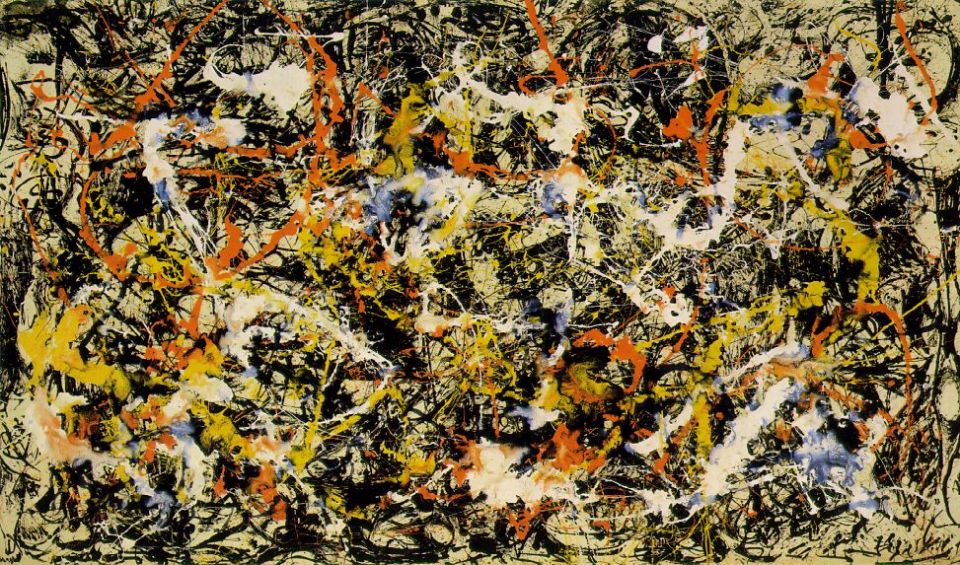 Angles, viewpoints, shadows and light, you can look at an art work and see a live or die passion play, performed by a convoluted and colourful troupe of Jackson Pollock’s dripping and erratically painted lines. You can see a fight to the death, a transient nightmare, if you know where to look. Modern Art is a labyrinth of metaphor and enigma packed within, what are often, very simplistic images.

Labyrinths can be seen everywhere, in the snarled paths of relationships to the difficult routes forged up, and down, the slippery ladder of success. Everyone at some point in their life needs an Ariadne though, with her guiding golden thread to help you safely find your way home. For those not entirely up to speed with their Greek myth, Ariadne was a Greek goddess who fell in love with Theseus, helping him out of the Minotaur’s clutches in the original labyrinth, thousands of years ago. He wasn’t thankful though, after promising to marry her, he betrayed and abandoned Ariadne on the Isle of Naxos, leaving her sleeping on the pebbly seashore. She is a cult figure for artisans who tend to wear their melancholy on their sleeves, and she is an excellent starting point when trying to unravel some of the riddles within Modern Art.

To Giorgio de Chirico, the Italian surrealist painter, Ariadne was a talisman, a recurring figure throughout his life’s work. In all of de Chirico’s pictures of her, Ariadne takes the form of a white statue, an image based on a sculpture of the goddess in the Vatican, reclining on a rock on the shore of Naxos, crossed legged and covered by crumpled robes, head supported in sleep by folded arms. de Chirico transports her from antiquity to a strange futuristic world of empty abandoned piazzas, where galleons sail on sand dunes in the distance and steam trains float through empty and darkening vistas. In “The Melancholy of a Beautiful Day” (1913) and many other of de Chirico’s paintings, which feature her, the statue is hemmed in by shadowy dark arches and colonnades, under which many distasteful characters may lurk. de Chirico said of this recurring motif that “the nostalgia of the infinite is revealed beneath the geometric precision of the piazzas.” This is a precise and claustrophobic world, an infinitely empty and lonely place without time, there is civilization to be seen, on a hill in the distance, but a dark figure, the only living figure in the painting, is prevented from reaching it by Ariadne and the long shadow she casts.

The shrouded and dark figure depicted is in fact a modern Odysseus, another melancholy figure from Greek myth, often prone to bouts of nostalgia. As Homer writes of him in the Odyssey, “he sat weeping by the seashore, as he had before, breaking his heart in tears, groaning, and grief. He looked out across the barren sea and wept.” Today the term nostalgia brings to mind warm and pleasant rememberings of times past, perhaps recalled in a rose tinted light. But the word actually springs from the Greek nostos, meaning home, and algos, meaning pain, it is a sense of loss  which runs from the memory of the things you lose as you progress through your life.  Emotionaly, this is where our shrouded Odysseus is in the painting, it is where de Chirico himself was when he painted it too, lonely, miserable, cold and alone in Paris, reminiscing back to his Italian upbringing.

A way out is on offer to Odysseus in The Melancholy of a Beautiful Day though, it is on the bustling hillside in the distance, blocked by Ariadne and her shadow. So why can she not be overcome? Because, unlike the arches, which represent nostalgia, Ariadne herself represents melancholy, that irremovable, invincible monkey on the back of any artist worth his salt. Melancholy is a great immeasurable, reasonless sadness, “a luxurious gloom of choice,” said Wordsworth, which some people harbour deep inside and struggle to be rid off. The statue of Ariadne, depicted by Chirico, is particularly melancholic because she is stranded in sleep, forever on the verge of waking up and discovering that she has been betrayed. To any observer she is stranded, constantly a moment away from heartbreak and because of the infinite nature of her sadness, the shadow she casts is impossible to cross, like the impossibility of removing  melancholy from a troubled soul. 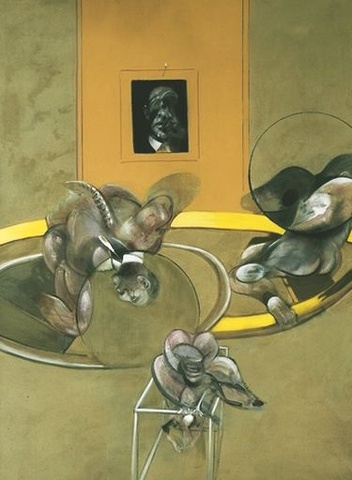 The themes of melancholy, nostalgia and enclosure can also be seen in Francis Bacon’s 1975 surrealist masterpiece “Three Figures and Portrait.” Here the tragic, melancholy figure of Ariadne is assumed by George Dyer, Bacon’s East End wide-boy partner, who lived his life getting  drunk off Bacon’s money in Soho and committed suicide in 1971, a few years before this picture was painted. The all seeing, dead centre portrait which overlooks the three convoluted and seemingly spinning figures is almost certainly Dyer and it is also argued that the two broken bodies, who’s twisted and misshapen flesh turn around two visible spines, are also representations of Bacon’s boyfriend. Dyer is to Bacon in the 70’s, what Ariadne was to Chirico in the 20’s, a figure which represents loss and nostalgia for a time irredeemable. But Bacon does not show the same physical respect to Dyer as Chirico shows to Ariadne, because Chrico’s attachment to her is one of distance and psychology, were as Bacon’s attachment to Dyer is based on flesh, so he is portrayed through the prism of the gut wrenching mess of sex and Bacon’s own emotional reaction to Dyer’s self destruction.

Like in “The Melancholy of a Beautiful Day” and the depiction of Odysseus, here Bacon does a similar thing, placing a bird-like creature to the fore of the painting, with a human gnashing mouth and dripping entrails, in true Bacon style. This figure represents the Furies, the three winged goddesses of judgment from Greek myth, with one sat here in deliberation on Dyer’s brief thirty years, in all its differing shades. However the Furies are not always harbingers of judgment, they can also be protectors and guardians of the downtrodden in society, the persecuted, like gays perhaps, in Dyer’s day, when homosexuality could still lead to a life as an outcast and even prison time.

The claustrophobia induced by Chrico’s arches and shadows are replaced in this work by circles, inspired by Bacon’s interest in primitive radiography, when areas of treatment in diagrams were often indicated by yellow circles. Here the area of treatment is within the wide yellow circle, which takes up a quarter of the canvas, turning this space into a radiographer’s room, where the rays do not allow us to view the body from the outside in, but turn the body inside out, for the ultimate examination. An opaque sphere, in the left of the painting, offers the only area of redemption, an air bubble, in an otherwise poisonous room, the tiny confines of which being the only place where Dyer’s head is clothed and intact.

The emptiness of de Chirico’s Piazza squares are also echoed in Jannis Kounellis’s “Untitled 1979,” a large charcoal drawing which features a seemingly empty town. Perhaps it is the town which Odysseus can see on the hillside, if it was, he would be sorely disappointed, because it is just as lonely as his current position. To the right of the picture are five charcoal faces and above the townscape, a jackdaw and a hooded crow, struck by arrows, mid-flight. An Ariadne figure is no longer recognisable in human form here, instead she can be found in bricks and mortar, in the industrial chimney which rises above the town, smoke billowing from its brim. The chimney to Kounellis is a monument to the passing of the Industrial Revolution, nostalgia for a time lost, for a time when chimneys lined the sky and poured smoke into the atmosphere. The chimney is also representative of the creative mind, the toil of pouring heart and soul into art, with the pinioned birds representing the imaginative mind stalled, prevented from soaring, by fear of expression, something to be avoided at all costs, because creativity is the ultimate vent for nostalgia and melancholy.