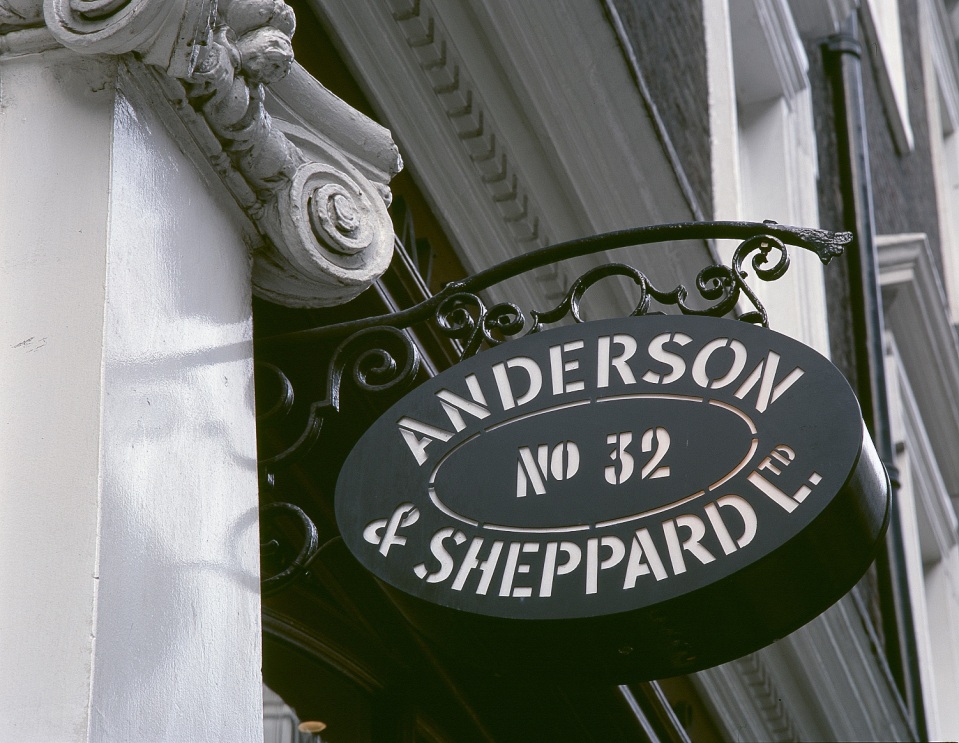 Quiet perfection and sealed lips has been the guiding mantra of Anderson and Sheppard, the Savile Row tailor to virtually every renowned dandy of the past one hundred years. Their style of cut, the quintessentially elegant English drape, “the natural look, the sloped shoulder, the limp silhouette,” has graced the backs of many a bon viveur from the dashing Rudolph Valentino to the debonair Cary Grant. It is a style, said Charles Bryant, a former managing director of the company, for men who want to “look right without giving the appearance of having studied their clothes.” For that is the first and foremost rule of male elegance, “the minute a man is overdressed, he is badly dressed.”

The steady and introverted nature of Anderson and Sheppard has seen a degree of outward change since Anda Rowland, the daughter of the famous tycoon Roland “Tiny” Rowland, took over the reins of the business in 2004. Although she bristles at the term “changes” and prefers to label them “re-arrangements”, the cosmetic alterations to the shop have nevertheless been noteworthy. The firm which once nearly sued Sir Ralph Richardson for noting in a theatre programme that he was outfitted by A&S, such was their distaste for publicity at the time, recently took the step of setting up a web-site and published a luxurious book detailing the shop’s history. The cutting room, filled with beautifully dressed gentlemen addressing each other always as “Mister” as they attend to their work, has, after decades of secrecy, been opened to public view for the first time. And in a move which sparked predictions of the immanent doom of bespoke tailoring, the company ditched its Savile Row address for a less forbidding home around the corner on Old Burlington Street. “In prestige terms,” says Anda, “we’re nearly 105 now, we don’t need the address anymore, the reputation can take a move a couple of hundred metres away.”

It is a reputation which has more than its fair share of glamorous lustre, a glimpse through the pages of their old order books will see grand names such as Lord Olivier, Douglas Fairbanks Jnr. and Fred Astaire reoccurring, while a thumb through a more recent volume features names like Bryan Ferry and designers Tom Ford and Calvin Klein. Prince Charles is also a committed customer.

A&S has always attracted a creative crowd, “The more traditional firms didn’t take an interest in actors, they didn’t really want that kind of trade,” Anda says. The appeal of the A&S cut lies principally in the freedom of movement their suits allow to an actor, a photographer or dancer, whose profession is dependent upon movement but also on sartorial sophistication. “We have a very distinctive cut,” Anda adds, “which is the soft natural shoulder and the high armhole, the sleeve itself is bigger than the armhole, which necessitates that it is sewn in by hand, all of this means the clothes actually stay on your back when you’re moving around, so if you are an actor, or if you’re Fred Astaire, the suit moves with you and you don’t need to think about where the shoulder pad is going.”

The English drape was a cut developed by Frederick Scholte, the mentor of Peter Gustaf Anderson, the co-founder of A&S. Scholte was a student of military tailoring, but worked at softening the strict and tight silhouette of uniform, the constructed chest, the nipped in waist, into something lighter and more delicate. Scholte found a sartorial soul mate in Prince Edward, later the Duke of Windsor, who is considered by many to have been the best attired man ever to grace the planet. Tired of frock coats and the stiffness of military attire the forward thinking prince demanded clothes he could breathe in and became the chief exponent of Scholte’s graceful design. The wearer has to have a degree of flamboyance though to carry the style off, he has to fill the space and look the part and be in possession of the necessary confidence and swagger in order that the man wears the suit and the suit doesn’t wear the man.

Despite the exterior face-lift the bespoke craft remains entirely unaltered from Per Anderson’s day. The same set of 27 measurements, twenty for the jacket and seven for the trousers, are taken from every customer and the quality of the materials used is also as high as it has always been, with one fine specimen of Peruvian cloth, being proudly shown off by the firm’s current MD and head cutter, John Hitchcock, costing £1000 a foot, although most of the materials are generally sourced from the North West of England. There is very little snobbery involved either, the customer tends to get what the customer wants, without a raised eyebrow in sight when a skull and crossbows lining is requested or a loud Hermes pattern, in an attempt to express a bright sense of individualism.

Of course a shop bought suit, even from a leading house, would often be cheaper than an A&S number, their standard lounge suit generally checks in at the £3000 mark, increasing in expense the more bells and whistles you add. Anda extols the virtues of bespoke by comparing the craft to watchmaking, “You can have a beautiful watch,” she says, “and someone mentions ‘oh my Swatch cost £12,’ well of course it did and it performs the same function, but you will not be enjoying it in the same way, or be able to hand it down to your grandchildren and beyond, you just don’t have the same relationship with it, plus it doesn’t look as good.”

Old Burlington Street has done nothing to blunt the potency of the brand, despite the financial rigours the world is suffering and with big spending distinctly out of fashion; profits at A&S are up, news that is not necessarily replicated over on the Row. People are still willing to spend megabucks on products they perceive to be quality, but the quality has to be provable; something A&S can do with panache. Anda describes her customer as the sartorial equivalent of the wine connoisseur “who wants to go all the way and visit the vineyard.” And the customers do range from different parts of society, from the moneyed gentry who order sixty suits at a time, to the London taxi driver who has spent a lifetime saving up.

A spike in interest in men’s elegance has also been noted by A&S, after the Italian dominated 80’s and the dress down 90’s there has finally been a “perking up,” says Anda, in male style, complimented by a new found love of bright colour, “After years of casual Fridays, people have finally had it with all that dullness,” she adds. The prominence given to sharp suits in the popular television show Mad Men also has its part to play in the renaissance, the 60’s style pocket square and PT-109 tie clips being in particular vogue at the moment. It’s always been that way for men though, who tend to base their style on dead icons. “It’s similar to women’s fashion,” Anda says, “they use a lot of very young girls in advertising and when anyone questions it they say ‘well women don’t want to look like their seventy five year old mothers, they want to look like their daughters,’ but with a man he generally wants to look like his hero, and his hero, more often than not, is probably dead because he’s a 1930’s guy, or he’s much older and he’s Clint Eastwood, but they tend to be from an era gone by, and that works for men in a way that models don’t, men like to see the clothes on a real body.”

“The whole point of Anderson and Sheppard,” wrote Graydon Carter, editor of Vanity Fair, “is to make suits, overcoats and other garments that conform to an individual like nothing else in this life.” Fashions rise and wane but elegance is a constant. When The Beatles sang on the Savile Row rooftop of Apple Corps in 1969, bemused gentlemen and colourful Carnaby Street hipsters gazed upwards in front of the old Anderson and Sheppard door. Brash and beautiful as it was that scene came and went, but Scholte and Anderson, Windsor and Astaire, still live and breathe in silhouette and shadow over at 32, Old Burlington Street to this very day.