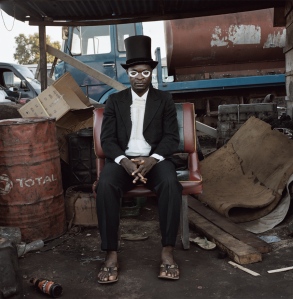 A woman with milky white irises stares blankly towards the camera. A human hand protruding from her mouth, like the tail of a calf trapped in the jaws of an anaconda. An old woman sits by a barred window, in a rocking chair, two golden coins resting in her eye sockets. Her fee for the boatman to ferry her to the underworld. But she doesn’t look dead.

A badly burnt body rises from a car wreck and a vampire taxi driver cradles his latest fare. While a man sits dressed in black, with a black top hat. White paint coated thick around his eye’s he seems to resemble Baron Samedi the voodoo master of the dead, giver of life and healer. He sits, the king of his own domain amid the empty Total oil barrels and rotting mattresses.

These are images created and photographed by profession 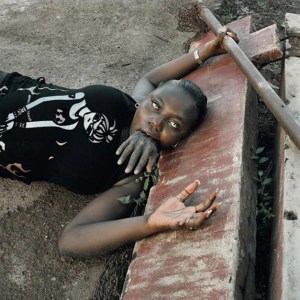 al photo-journalist Pieter Hugo and are partly inspired by Nollywood, the trail-blazing Nigerian film industry whose shoestring budget and dynamically creative sensibility is taking the continent by storm. The compositions also owe a large amount to Nigerian myth, character and a visionary imagination, fired by a parched, empty landscape that helps give man-made images more potency. As Pieter highlights “I wanted to use the Nollywood aesthetic as a starting point; its theatrical and performative quality, the spectacle of it. Fictional reality presents us with opportunities of reinventing ourselves. That’s beauty.”

Nollywood, is the third-world successor to its decadent father on the Californian coast. It is the third largest film industry in the world, producing nearly 1000 films a year for the home-video market, with an annual turn over of nearly $500 million. Some of the films are made in as little time as a week, with limited budgets, on location on the streets, in real homes and off

ices, among the people. Script errors are left in, the storylines are often shockingly convoluted and the picture quality is questionable.

Nevertheless, it’s got the excitement of Hollywood in the thirties. The industry is booming and Nigerian stars are in the ascendant. The centre of the industry is an area called Surulere, a dusty bedraggled, district, buried within the Nigerian capital Lagos. You are more likely to find open sewers than a star lined boulevard, but the area serves the same purpose as Hollywood’s chic towers. Surulere’s fading colonial leftovers, hide a melee of casting couches and thousands of young hopefuls mill around waiting for their chance.

The country has always had a strong film industry by African

standards and government help has always been available in one form or another. The National Film Corporation was set up in 1979 and promoted distribution, and more importantly implemented a system where cinema owners had to show at least one Nigerian film for every ten foreign films presented. This helped create an audience for home grown cinema and ensured that Nigerian film did not go unwatched in favour of more glamorous fare from foreign shores.

The western reaction to Nollywood is confusion and Pieter’s book will play a role in the continuing discourse. Is it art? Or just throw away soap-opera? “Nollywood doesn’t give a fuck about art” says Stacy Hardy, who contributed an essay to a book that presents the Nollywood photos. “It doesn’t even care if you think it’s art. Nollywood is it’s own medium of corroboration, a means of self affirming and self-creation, speaking up. It decimated Weste

rn divisions of hi and low culture of creation and enterprise, of production and distribution.”

Nollywood confounds the expectations of the western view of film making. To us the film is still sacred. It’s an art-form passed down from Marnau to Chaplin from Capra to Cassavetes. Whatever taboos we break, films are still presented around the same basic rules of script, setting etc. No matter how crude, they have a particular quality. They must ultimately respect and be reverent to the fact that they will play upon the “big screen”. The Nigerian industry has no reverence for our traditions but then again why should they?

Interestingly, one of Pieter’s pictures shows a naked man, alone in the empty, barren, Nigerian landscape, wearing only a Darth Vader mask. A famous western cinematic symbol upon a body totally unhindere

d by western decadence, representative of an African culture that intends to be influenced by the west but not so much that it loses touch with itself. Losing its original form to gluttony and obesity.

Horror is another favourite genre for Nollywood and Pieter’s images show their fair share of gore. Vampires appear quite frequently, feasting upon numerous victims, or just staring empty eyed into the camera. These aren’t the vampires of John Polidori though, the suave landed gentry vampires, who go for the genteel lay-dees, who wine and dine them before going for their necks and trolleying them off to the land of the un-dead. No, these vampires are bit more danky, they forego the night at the opera and jump you in the dark alley by the post office.

riously in parts of Africa than it is in the west though. As recently as 2003 there were riots in the African country of Malawi over fears that the government was colluding with vampires. One man was stoned to death and reports of alleged vampire attacks swept the country. Nollywood and Pieter’s use of them is of course a nod to the role they still play in the African occult, but there is also much deeper reasoning behind their usage.

Stacy Hardy describes them as “slippery creatures” who jump between the boundaries of the living world and the afterlife. They have no respect for longstanding lines and rules, they hop between them and confound expectations like Nollywood itself. Stacy writes in the book “ The obsession with strictly defined boundaries haunts Western conceptions of subjectivity, perhaps the vampire, the figure who lives crossing lines, messing with those boundaries, tells us s

omething about how they are made and how they can be ripped down.”

They also perhaps represent our, the Westerners relationship with Africa. We are often voyeurs to African suffering. We gaze at our television screens at images of slaughter and genocide and half turn away, but keep one eye on the screen. “Urgh isn’t that kind of barbarism ugly” we think to ourselves, but will we, personally act to stop it. Of course not, we are just craning our necks to get a good view of the car crash, having a good look at the body before the police arrive.

We keep one eye on the screen because we are witnessing how the other half lives, it’s a million miles away from our comfortable lives and we thank heavens we are not with them. It is after all only natural, we are interested in witnessing it and stuffing our charity envelopes, but from a sensible distance. We are still intrigued, fascinated even by the “black continent”, but it’s the Rivera still for our holidays. We refuse, as bloated, recklessly moneyed, western nations to salvage Africa, to write

off debt. We invest yet we ensure a healthy amount of the profits return home. We quite happily feed off Africa’s struggling body, so are we the vampires? Possibly.

For years and years we have been bombarded with images of African butchery, civil war after civil war, famine after famine. These are now old images. Things do change. Situations do improve dramatically. Just the fact that Nigeria has a film industry worth millions is an example of change, that an African nation now deals partially in showbuisness and not bullets. But imagine yourself in a suburban middle class British home, telling your suburban middle class British neighbour that you are about to take the children on holiday to Nigeria and what will the reaction be? A howl of derision and furrowed brow? Old perceptions are difficult to overcome.

Hugo’s pictures highlight these responses, these perceptions within us and Nollywood happily mocks our ignorance. As Stacy Hardy says, the photographs “ force us to acknowledge our icky vampirism.” It is up to the individual to decide of course if Pieter’s images, the blood, the gore, the age old symbolism involved,  actually furthers long-held perceptions, by showing images based around age old myth and blood

The Nollywood landscape is often a desolate one, empty, the natural magnificence that springs into the mind of the casual tourist when he thinks of Africa is missing. No this landscape is barren, a wasteland, yet it is full of intriguing figures and dynamic, sometimes unsettling icons. As T.S Eliot says in his poem The Waste Land “A heap of broken images, where the sun beats. And the dead tree gives no shelter, the cricket no relief. And I will show you something different from either. Your shadow at morning striding behind you. Or your shadow at evening rising to meet you.” Thrilling images amid an empty landscape, cheaply made to entertain the masses.  A repressed nation by war, colonialism and poverty, finally finds its voice.