In Keizo Kitajima’s new collection, USSR 1991, there is a picture of a blonde girl with dark eyes standing on the side of the River Neva in St. Petersburg. Her clothes look surprisingly modern despite the 21 years that have passed between the images being taken and their publication. Only the caption gives it away: “Yes, the name St. Petersburg is fine,” 22 year old model Silvia Myznikov says, “but I’m not used to it yet.” Born when the city was still known as Leningrad, Silvia absently turns a monumental moment from history into something like an inconvenience at the post office.

Before his arrival in Russia, Keizo spent his career producing picture collages of life in Shinjuku, a district of Tokyo and hotbed of underground culture and politics, where he created twelve booklets of photographs conveying the aura of the time. He also produced a seminal collection of images of New York in the 1980s. This new collection of photographs, taken on a trip through the USSR in 1991 and gathered together by Little Big Man Press into a lovingly crafted book, captures ordinary people living through a period of great upheaval. “Compared with the dramatic change of a political system, the tale of each individual’s life is very small,” says Keizo, “however I wanted to ensure the photographs valued these people’s stories.”

23/9/1991, Baku, Azerbaijan SSR: Andrei Titov, 16 years old. A Russian boy whose father is a Soviet Army officer and whose mother is a physician.

Depicting the re-evaluation of imposing and strong objects of state, suddenly rendered small and laughable in the wake of political revolution, it is often the individual who is at the foreground of these photographs. “I imagined that the collapse of the Soviet Union gave the Russian people an unfathomable shock,” says Keizo, ” and I tried to make a symbolic iconographic image of the people I met, based upon each individual’s tale.” Like the old paintings of Tsar Nicholas II that place the monarch front and centre his coat decked in garter ribbons and trinkets signifying royal power, the people here stand by icons of their respective trades: a woman in a red cardigan stands by a green loom in a silk factory bankrolled by Charles Aznavour, while a man in a blue flat cap with a wrench in his hand works by the gnashing teeth of a Siberian logging machine.

History is the landscape from which individual stories rise, like, for example, the story of Larissa Romanov, a 20 year old clothes factory worker. She is photographed in Nevelsk, a fishing town located on the southwest coast of Sakhalin Island in the North Pacific. During its history the island has passed between Russian and Japanese sovereignty so Nevelsk is also known by its Japanese name Honto-Cho. “A Korean Air jet was shot down by the Soviet air force offshore here in September 1983, 200 people, or more, were sacrificed,” Keizo says, before adding, “for me this photography represents a hybrid scenery, in which various histories are piled up.”

Whilst Keizo asked many people to pose for portraits, not all accepted, “but all those that did seemed to show me their pride,” says the photographer. That pride is clear in the portrait of Dzhuma Redzhepov, a 65 year old, who made rugs with pictures of celebrities on them. With two etchings of Stalin hanging above him, he stands in a cluttered living room, the lapels of his blazer lined with medals won during the defence of Stalingrad in World War Two.

“I thought that I should try not to forget the people of the USSR I met that year,” Keizo adds, and his photographs offer a vivid reminder of those people who didn’t live for the Soviet Union, but nonetheless tried to live as best they could within its fabric. 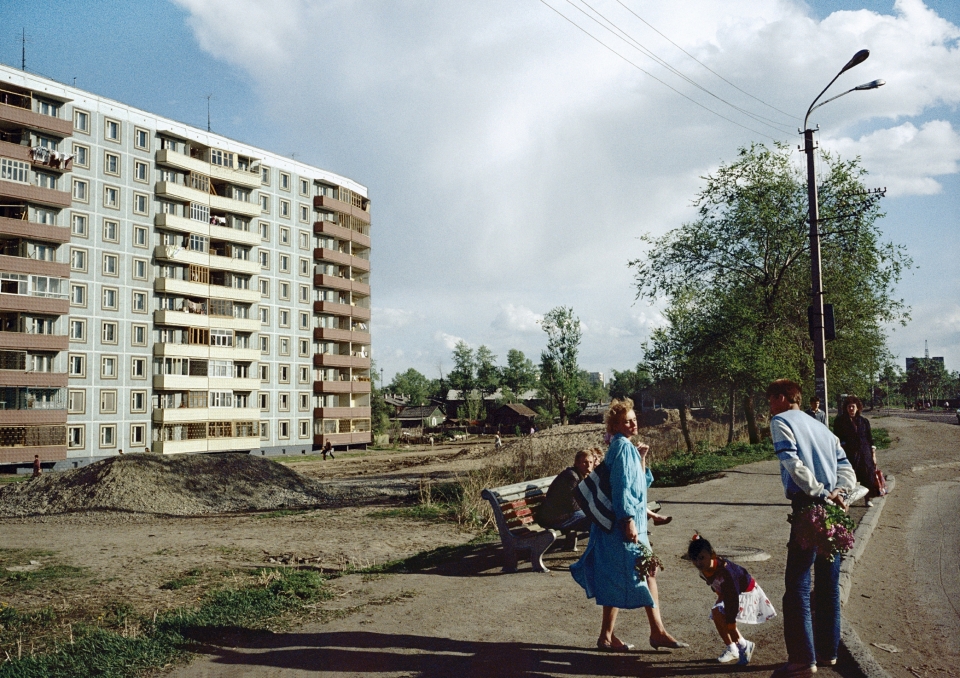